The Samyukt Kisan Morcha (SKM), an umbrella organization of the farmers, has decided to end the movement. The decision was taken after the SKM received a letter from Agriculture Secretary Sanjay Agarwal on the agreement between the Union government and the SKM on issues that would bring the movement to a close. The farmer organizations will vacate all the protest sites on the Delhi borders on December 11 and return to their homes. 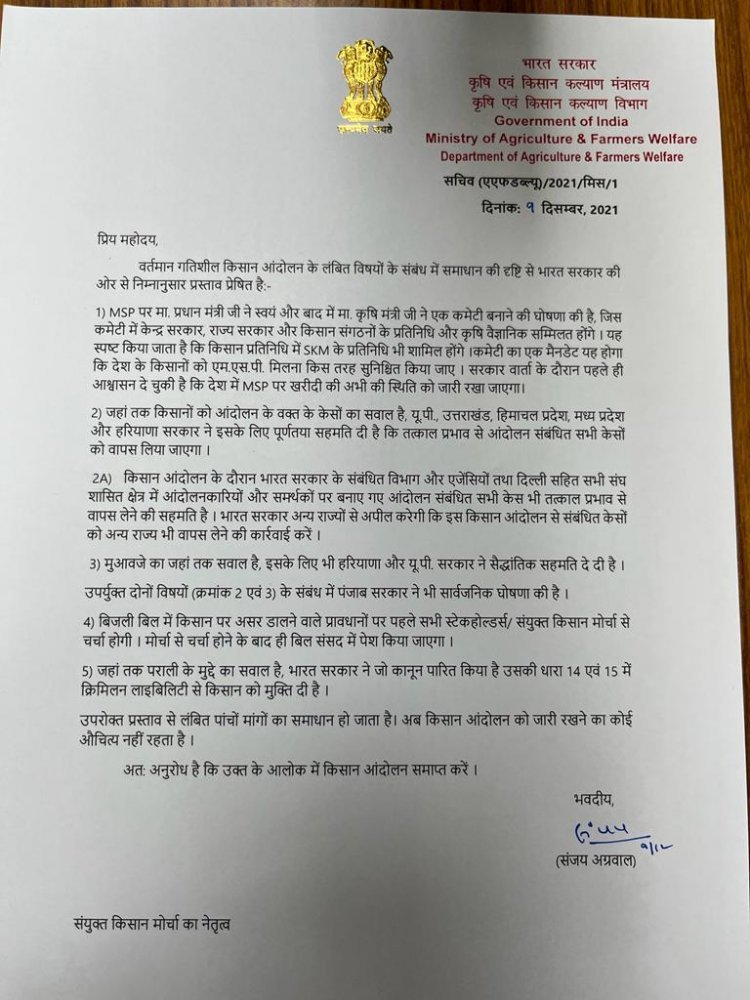 The letter sent to the SKM leadership from Agriculture Secretary

The Samyukt Kisan Morcha (SKM), an umbrella organization of the farmers, has decided to end the movement. The decision was taken after the SKM received a letter from Agriculture Secretary Sanjay Agarwal on the agreement between the Union government and the SKM on issues that would bring the movement to a close. The farmer organizations will vacate all the protest sites on the Delhi borders on December 11 and return to their homes.

According to a senior official of the SKM, the decision was taken in the organization’s Singhu Border meeting this afternoon. It came after receiving an official letter from the Secretary to the Union Agriculture and Farmers’ Welfare Ministry written on behalf of the Union government. A copy of the letter is attached to this story.

In this letter, the Ministry has written about the issues on which there has been an agreement in the ongoing talks between the SKM and the government. Besides the formation of a committee on Minimum Support Price (MSP), the cases registered against the farmers during the movement, the farmers’ consent to table the Electricity Bill and the relief from legal action against the farmers on the issue of stubble burning, the letter also mentions the consent given with respect to the compensation to be given to the kins of the farmers who lost their lives during the movement and their rehabilitation. The letter then says that since a consensus has been reached on all these issues, there is no justification to continue the movement.

Confirming the SKM decision, one of its officials said, “On December 11, farmers will vacate the protest sites of the movement and go back to their homes.” The decision came in the SKM meeting held on December 9 afternoon. See the image given below.

A top official of the SKM told RuralVoice that the talks had been going on with the government for about a month. Initially, the government had delegated its officials to hold talks with the farmer organizations of Punjab to find a way out. Some days ago, talks also started between Bharatiya Kisan Union (BKU) general secretary Yudhvir Singh and Home Minister Amit Shah. Senior farmer leader Balbir Singh Rajewal also joined the talks on behalf of Punjab farmer organizations.

Consensus had started building between the government and the farmer organizations. When the Prime Minister announced that the three farm laws would be repealed, the SKM did press with its demand for a law on MSP but later on it agreed to the formation of a committee. However, there were other major issues — the withdrawal of the cases registered against the farmers during the course of the movement and compensation to and rehabilitation of the kins of the farmers who lost their lives during the movement. Two days ago, there appeared to be a consensus on these issues too and an informal proposal from the government reached the SKM.

Despite this, the SKM had asked the government to give in writing the issues on which there was an agreement before it would announce to call off the movement. Even this morning, an SKM official had clearly said in a conversation with RuralVoice, “We cannot announce to call off the movement until we receive the official letter from the government.” SKM received the letter from Sanjay Agarwal, Secretary to the Union Agriculture and Farmers’ Welfare Ministry, this afternoon and subsequently, it was decided in the SKM meeting that the movement would be called off. Farmers will vacate the protest sites on the Delhi borders on December 11 and the tents and barricades on the toll plazas will be removed by December 15, SKM sources say.

The three farm laws had been brought through ordinances on June 5, 2020. The laws were called Farmers' Produce Trade and Commerce (Promotion and Facilitation) Act, 2020; Farmers (Empowerment and Protection) Agreement on Price Assurance and Farm Services Act, 2020; and Essential Commodities (Amendment) Act, 2020. The first two of these were new laws while the last was a liberalized version of an earlier law. The passage of the Repeal Bill will put an end to the two new laws and restore the Essential Commodities Act (ECA) to its earlier version.

Protests started against the three laws just days after they were promulgated. They went on intensifying and took the shape of a major farmers’ movement in only a few months. After their protests at a local level in Punjab, Haryana, Uttar Pradesh (UP) and other states, the farmers marched to Delhi on November 26, 2020. When they were stopped from entering the capital city, they camped on the borders of Delhi.

There were 11 negotiations held between the government and the representatives of the united front of the farmer organizations from the time the farmers came on the Delhi borders until January 22. But these broke down. In January, the Supreme Court stayed the implementation of these laws. It also constituted a four-member committee that had to submit its report within two months. One of its members, Bhupinder Singh Mann, resigned while the other three members — economist Ashok Gulati, agricultural expert Dr PK Joshi and Shetkari Sanghatana president Anil Ghanwat — submitted their report to the Supreme Court in March. The report is yet to be made public.

Meanwhile, the ongoing farmers’ movement continued at its pace and even intensified. On the occasion of Gurpurab on November 19, Prime Minister Narendra Modi made a startling announcement that the three laws would be repealed. Besides, he also announced that a committee would be formed to look into Minimum Support Price (MSP), an important demand made by the farmer organizations.

It was only after this that informal talks started with the farmer organizations. And these talks in turn resulted in the official letter sent by the government on issues where a consensus had been reached.

This farmers’ movement has made a place for itself in history. Most of its demands were accepted by the government. It lasted for more than a year and may well be called a national movement in every sense of the word. 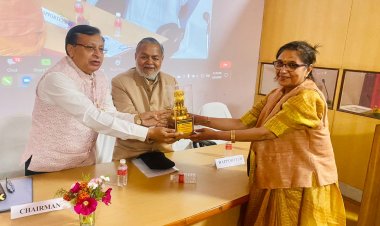 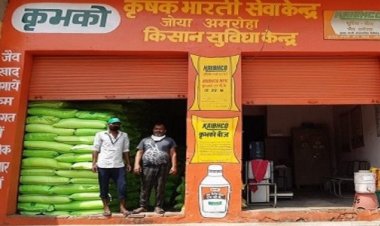 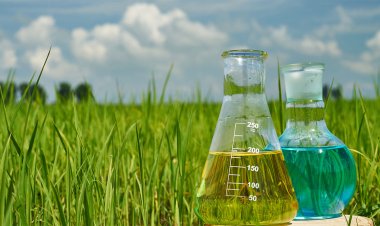 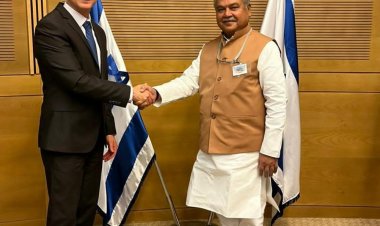 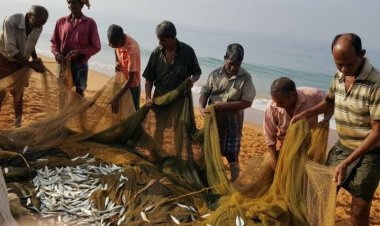 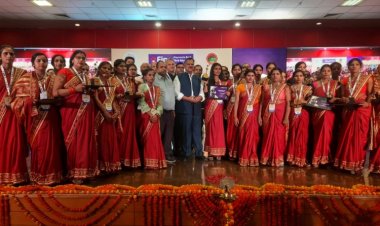 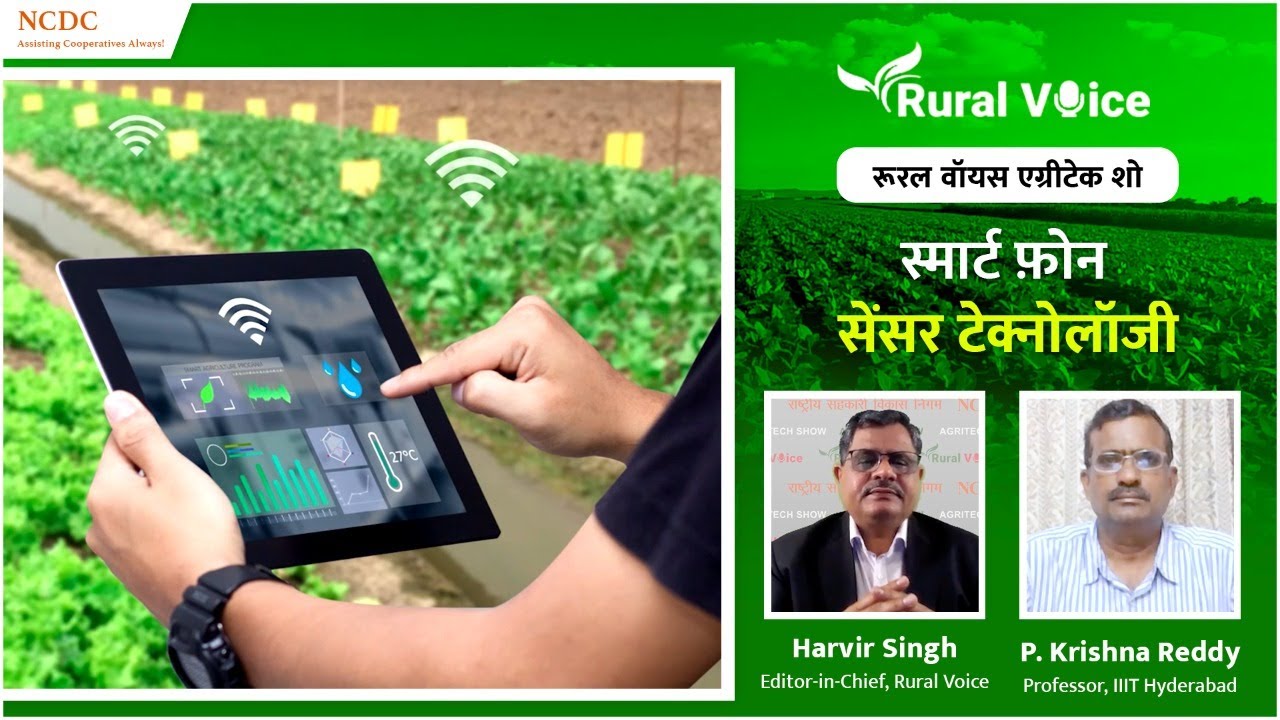